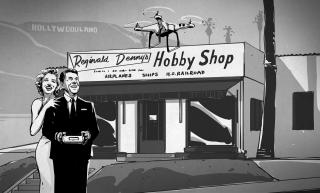 In the early 1930s, Reginald Denny, an English actor who lives in Los Angeles, saw a boy playing with an airplane powered by a rubber band. After he helped the boy adjust the gum and control surfaces of the aircraft, he crashed into the ground. Denny promised that he would build a new aircraft for the boy, and wrote a request to the manufacturer in New York. The first set to build the aircraft turned into a private hobby shop on Hollywood Boulevard, where Jimmy Stewart and Henry Fonda dropped in.